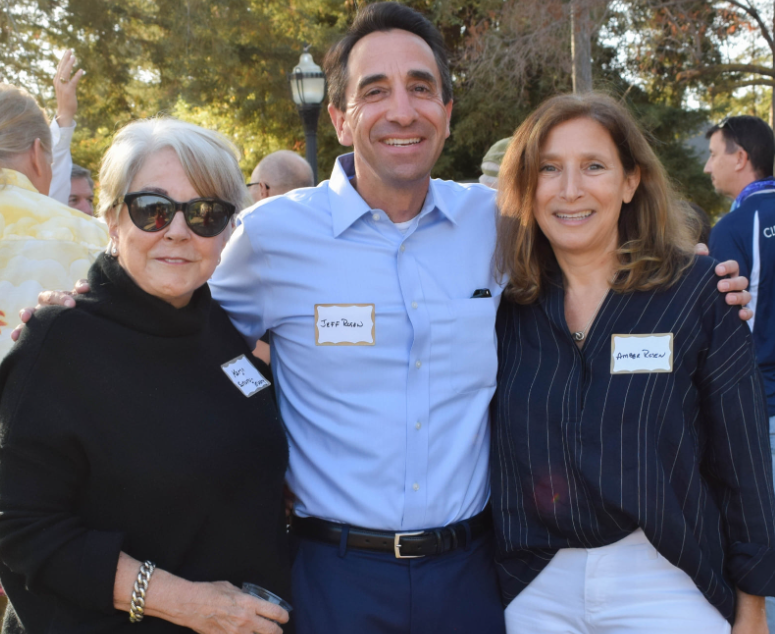 In 2017 as DA Jeff Rosen’s office was wrapped up the prosecution  of Brock Turner in the sexual assault case that occured in early 2015 on the Stanford University campus. . During that same time, Jeff Rosen began assisting Stanford Law Professor Michele Dauber and San Jose Women’s March founder  Jennifer Higging Bradanini in the recall campaign of Judge Aaron Persky. As Rosen provided the assistance that angered the #Metoo movement mob in the San Francisco Bay Area,  Rosen’s own daughter’s show a  data footprint that incidates while attending college in Wisconsin, they  collected  money on accounts for  sex , gas and large amounts of alcohol provided to campus fraternities.

Melcher , a ” volunteer” member of the Los Angeles Sheriff Department,  is reportedly running the fake domestic violence scam through JAMS such that CLETS  domestic violence restraining orders do not get put into the law enforcement data base system. Melcher is reportedly being assisted by Santa Clara County probate lawyer Temmerman , as Melcher represents Temmerman in his own divorce. In that case, Robert Redding now of the McManis Faulkner law firm,  reportedly agreed to throw the case as he represents the wife.

Temmerman was reportedly a ghost lawyer for  Jamie Spears  while his daughter, Britney Spears, was conserved in LA County during her divorce with Kevin Federline. Britney Spears was conserved by Commissioner Reva Goetz. Working for JAMS, Goetz is connected to the  private business handling the Temmerman divorce.

Catherine Gallagher of JAMS presided over the Temmerman divorce. She was  reportedly paid over $1 millon through shadow  cryptocurrency accounts as part of a scheme to rig the case and assure the former Mrs. Temmerman did not get access to the finanicial records and case files of Mr. Temmerman’s thriving probate law firm.

Karyn Sinunu Towery , wife of former state bar executive Jim Towery, is said to be arranging payments for kickbacks in a case rigging scheme where her husband is deeply rooted. Her husband is Judge James Towery. He sat in Silicon Valley family courts for over a decade after his employment at the state bar where he was known to be paid kickbacks from Thomas Girardi  and Jack Trotter , the founder of JAMS.

JAMS is the largest arbitration, mediation and private judging business in the world. By 2010 the business began working with divorce lawyers to expand from employment arbitration cases into family law matters where their associates are appointed as private judges  in middle class and high asset divorce cases.

Sinunu Towery,  who resigned from the Santa Clara County DAs office  in 2011 after reportedly taking payoffs not to prosecute Silicon Valley executives and 49er football players,   has reportedly  been  arranging kickbacks to area judges and reporters with the San Jose Mercury News.

Sinunu reportedly had an affair with San Jose Mercury reporter Ric Tulsky  in 2005, as they worked on a Trainted Trial story related to prosecutorial misconduct cases as Silicon Valley’s criminal matters. That award winning article has now been scrubbed from the internet in an effort to conceal patterns of public corruption l linked to both California’s family and criminal courts.

Collectively it appears these San Jose Mercury reporters and associates made  over $1 million  in cryptopayment kickbacks to kill stories about family court cases and pedo  rings operating from  the Stanford University and Santa Clara University campuses. Payments were also made to former reporters who have gone on to work for local government attorneys and voting offices as Public Information Officers. In those positions they are able to keep the public and competing news organzations from information that would expose  the corruption infecting the courts.

Jeff Rosen, who again otained the Mercury endorsement to win his 2022 re- election for district attorney, reportedly arranged for $1 billion in “advertising”  and “investment”  dollars through shell companies, real estate transfers  and bogus LLCs  to Alden Capital along with pocket immunity for shareholders as the money was exchanged through cruptocurency accounts and transactions arranged by Jeannie Webby , the wife of Sean Webby. Mr. Webby has acted as Rosen’s Public Information Officer since  2011. Webby is a former Mercury reporter who has maintained ties with Stanford University Law Professor Michele Dauber to keep his boss, Jeff Rosen,  in office .

Rosen has refused to invesitgate or prosecute public corruption cases tied to the courts where his wife is now a superior court judge.

The National Center for Missing and Exploited Children Can Be Dangerous For...
Scroll to top